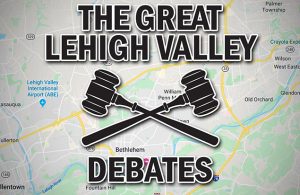 Join hosts Ryan Hill and Jon Lunger as they tackle the hard-hitting issues that define our Lehigh Valley community.

There’s never been a more important current events comedy show in the history of the Lehigh Valley! Jon Lunger is a comedian, improviser, and writer who, along with comedian Glen Tickle, is currently re-writing the entirety of Wikipedia via “The Improvised Wikipedia Podcast”. Jon has performed at the District Improv Festival, Baltimore Podcast Festival, Nashville’s Third Coast Improv Festival, The Del Close Marathon in NYC and at numerous other comedy festivals across the country and from 2012-2017, Jon was ¼ of the improv team ManDudeBro.