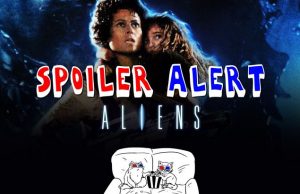 Comedians Matt Candio and Jon Lunger take you on a journey through the ridiculousness of modern cinema in a hilarious send-up and take-down of one of Hollywood’s most legendary and/or notorious films. It’s a frenetic, pseudo-improvised performance that will remind you why you love movies in the first place. This time up they’re tackling the classic 1986 James Cameron sci-fi space adventure Aliens.

To be clear: This show is Matt and Jon recreating Aliens from memory, just the two of them, live, on stage. Matt Candio is a comedy performer and teacher based in Bethlehem, PA. You can see him perform with Evan Stutts in We’re Good You’re Great on the 1st and third Friday of every month at SteelStacks. Matt also performs with the NYC-based improv team Dark Sneak Love Action. Jon Lunger is a Pennsylvania-based comedian, improviser, and writer who has been performing comedy since the good old days of 2012. Along with fellow comedian Glen Tickle, Jon is currently re-writing the entirety of Wikipedia via The Improvised Wikipedia Podcast.