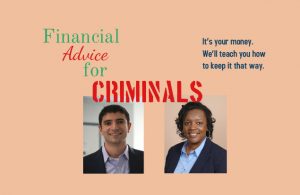 Fun Fact: Nefarious mob boss Al Capone was taken down by an IRS agent. So instead of murder, Mr. Capone went to prison for sloppy tax accounting.

Financial Advice for Criminals will include standup, sketch, and improv comedy all while giving you factual knowledge. Aaron Alkasov and Janear Hankerson will teach you how to C.Y.A. (Cover Your A$$), legally of course. Remember, nobody is a criminal until the accountant sings.

Aaron is a comedian, accountant, and older brother. He got his start writing bits for AIM away messages. Some people might know him for the 6AM Bit Show called ‘One Person Hot Spot’ at DCM19. Aaron is currently on indie teams Cranks & Pulleys, Staycation, and Knights of the Fourth Eye. He has studied Improv at ArtsQuest in Bethlehem, PA and at UCB in New York. Other comedy credits include character showcases, the Improv Comedy Power Hour, and sketch stuff. This one time, Aaron hosted a comedy game show called “Guilty Pleasures: The Game Show”. It was rad. Janear is a comedy writer from Easton who regularly writes and performs stand-up, sketch, and sometimes improv comedy. She has performed at ComedyPlatz at Musikfest, Brew Haha, and Steelstacks.