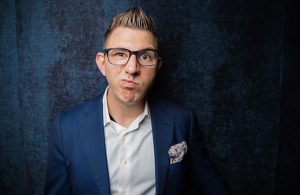 Scranton-based magician and performer Denny Corby is partnering with ArtsQuest to bring you You’ve Been Fooled!, an all-ages interactive comedy magic show featuring performers who, like Corby, have been stars of the hit show Penn & Teller: Fool Us.

VIP tickets include the closest seating to the stage possible and an exclusive pre-show meet and greet with all of the night’s performers! Denny Corby is a successful magician, entertainer, and keynote speaker. Through appearances on major cable networks like Fox and NBC, Denny has graced television screens across the country. He’s also put out an instructional DVD, Magic Tricks Now, sharing some of his favorite tricks to impress your friends, family, coworkers, and strangers. Wherever you meet him, Denny is guaranteed to make your day. He’s a warm-hearted goofball who lives to make people smile. Eric Jones is a Philadelphia-based performer who wowed the judges of America’s Got Talent by seemingly walking through a glass wall. He appeared on Season 2 of Penn & Teller: Fool Us, fooling both Penn AND Teller with a coin trick. He’s a regular at Magic Castle in Hollywood and New York City’s Monday Night Magic. Lucy Darling is the Mistress of Magic alter-ego of Calgary-based Carisa Hendrix who appeared on Season 6 of Penn & Teller: Fool Us. She’s been the past winner of Best Comedy Magic Show at the Melbourne International Magic Festival and recently held the Guinness World Record for Longest Fire Torch in Teeth time. Her show is a wonderful mix of comedy, carnival stunts, and amazing magical acts.

Performers are subject to change without notice