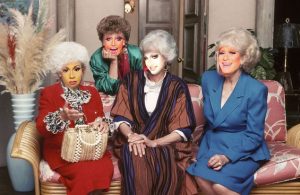 The Girls are BACK!

This live staged reading of two Golden Girls episodes features four of the Lehigh Valley’s favorite drag queens, all returning to reprise their roles from A Golden Girls Drag Christmas and The Hurricane of ‘91!

A Golden Girls Drag Show: Brother’s Homecoming features the two episodes of the series (S4’s Scared Straight and S6’s Sister of the Bride) featuring Blanche’s brother Clayton, a divorcee who comes into his own as a gay — and proudly so — man. He comes out to Blanche in Scared Straight and, two years later, returns to announce his engagement to his partner in Sisters of the Bride.

“Since most sitcoms up until this point only had one very special gay episode, Clayton is one of the few gay guest stars to get a return appearance. Clayton’s also important because he doesn’t back down. We see a gay man come out, define himself on his terms and then remain firm in the face of opposition from his sister.” Brett White, Decider

While all that is happening, Sophia sees the date and time of her death in a dream, Rose angles hard for a Volunteer of the Year award, and Dorothy basically just tries to keep her sh*t together amongst all the craziness.

This staged reading will feature costumes, props, and all the things normally expected of a staged show. The actors will also have their scripts in hand.