The Great Old Ones

Home / Events / The Great Old Ones 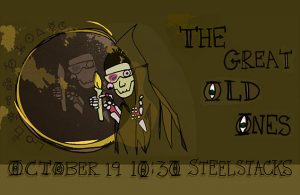 The Great Old Ones (Jon Lunger and Justin Passino) perform comedic improv in the style of modern horror stories. You’ll witness the creation of completely improvised, other-worldly “horrors” as The Great Old Ones dive into your nightmares and emerge with jokes.

It’s an improvised parody of science fiction/horror stories that will bend the boundaries of reality and silliness. Jon and Justin are two very spooky boys and this show is completely appropriate for the faint of farts… hearts. We totally meant hearts.

It’s like if H.P. Lovecraft met the Upright Citizens Brigade…
It’s like Stephen King wrote for The Kids in the Hall…
It’s like a commentary track on a season of Stranger Things but done by Will Ferrell…

Jon Lunger is a Pennsylvania-based comedian, improviser, and writer who has been performing comedy since the good old days of 2012. Along with fellow comedian Glen Tickle, Jon is currently re-writing the entirety of Wikipedia via The Improvised Wikipedia Podcast. From 2012-2017, Lunger was 1/4 of the improv team ManDudeBro.

Justin Passino is a member of the improv team Staycation – a former Improv Comedy Power Hour house team at SteelStacks – and can be heard on their improvised comedy podcast, Staycation Indoors. He also performs music as Pretty Lousy. A lot of people call his music “folk-punk” for some reason; he does not like this but tolerates it.