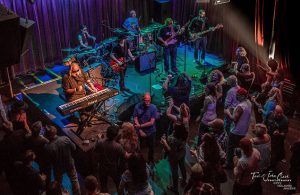 Steal Your Peach is a mixture of some of hardest working musicians in the Philadelphia area specializing in a mashup concept, fusing the music of The Allman Brothers Band and The Grateful Dead. Each band member currently has multiple projects, both original and unoriginal, but have formed a bond here with some of their favorite and most influential music, paying close attention to detail of all of the original music, while also adding their own improv to the mix making each show unique and exciting, and to create a very tangible symbiotic experience between the band and the listeners. “There is nothing like coming back to pay homage to the music that inspired us all to play.”