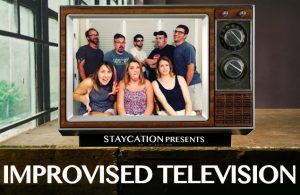 Lehigh Valley Comedy-troupe Staycation improvises an entire, original episode of television that has never been seen before and will never be seen again! Featuring a different story and genre every month in the vein of shows like ER, Law & Order, This is Us, The Twilight Zone, Dallas, CSI, Degrassi, Friends, Gilmore Girls and more! Each episode is also followed by an interactive talk-back segment in the style of Talking Dead where you, the audience, get to ask questions and unpack the episode with our performers!

Staycation is a comedy troupe that originated in 2017 as a Steelstacks house team for the Improv Comedy Power Hour. Since then, they have performed consistently around the PA, New York City, Maryland and even the internet where they have their own improv-comedy podcast called Staycation: Indoors.

You may also recognize some of their members from other projects such as Cranks & Pulleys, Valley Weird Squares, Cat Sweaters, Knights of the Fourth Eye, Spitfire and The Great Old Ones.