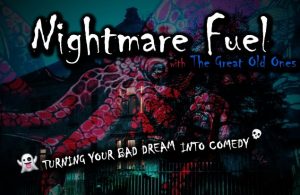 An improvised parody of science fiction/horror stories, Nightmare Fuel is the show that takes the story of an audience member’s real-life nightmare and turns it into side-splitting comedy!

You’ll watch in awe as a completely improvised, other-worldly, hilarious story is performed by The Great Old Ones (Jon Lunger & Justin Passino), live, on-stage, just for you. It’s silly and spooky and ridiculous and reality-bending and a really dumb-fun time!

It’s like if H.P. Lovecraft met the Upright Citizens Brigade…
It’s like Stephen King wrote for The Kids in the Hall…
It’s like a commentary track on a season of Stranger Things but done by Will Ferrell…

Jon and Justin are two very spooky boys and this show is completely appropriate for the faint of farts… hearts. We totally meant hearts.

Jon Lunger is a Pennsylvania-based comedian, improviser, and writer who has been performing comedy since the good old days of 2012. Along with fellow comedian Glen Tickle, Jon is currently re-writing the entirety of Wikipedia via The Improvised Wikipedia Podcast. Jon performs with numerous improv groups in the Lehigh Valley. You can catch him co-staring alongside Matt Candio in the two-man, pseudo-improvised show Spoiler Alert, and with Justin Passino in the improvised horror-comedy show The Great Old Ones.

Justin Passino has been performing comedy in the Lehigh Valley since 2016. He’s trained at the Upright Citizens Brigade Theater in NY and is currently a student of the UCB Improv Academy. In addition to doing a bunch of shows in the Lehigh Valley, he’s performed at multiple festivals in Baltimore, DC and NYC with his improv teams Staycation, Cat Sweaters and The Great Old Ones. You can catch him the first Saturday of every month at SteelStacks in “Improvised Television.” You can also find him on the internet in the web-series Trashburgh and on multiple podcasts such as Staycation Indoors and Amusing Ourselves to Death. In his spare time, he writes and performs music under the moniker Pretty Lousy. Sometimes he sits at home and stares at his dead house plants. On even rarer occasions, he sleeps.