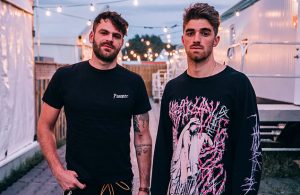 Grammy Award-winning and Billboard Chart topping artist/producer duo, The Chainsmokers, have evolved into a dominating musical force with a diverse repertoire of songs that have led them to become one of music’s hottest recording artists. Comprised of Alex Pall and Drew Taggart, their signature sound deftly reaches across indie, progressive and pop realms. Their evolution as producers and as songwriters has seen them develop some of the biggest breakthrough songs over the course of the last two years and their original tracks and remixes have topped the charts throughout the world.

In 2016, the group catapulted to worldwide stardom with 3 certified Multi-Platinum hits. “Roses,” featuring Rozes, from their Gold certified debut EP Bouquet, was a 4X Platinum smash that shot to #1 on Billboard’s Top Dance/Electronic Albums chart. “Don’t Let Me Down” featuring Daya, included on the duo’s second Platinum selling EP titled Collage, went 4X Platinum and was a top 5 Billboard Hot 100 hit. The duo won the “Best Dance Recording” Grammy for the track at the 2017 Grammy Awards. “Closer,” featuring Halsey, was also included on the Collage EP and went 7X Platinum, going on to become the longest running #1 single of 2016 on the Billboard Hot 100 chart.

In April of 2017, the group released their debut album via Disruptor/Columbia Records titled “Memories…Do Not Open.” The album, which has been certified Platinum, debuted at #1 in the U.S. on the Billboard 200 chart and produced the global, 2X Platinum certified smash “Paris” which debuted at #7, marking the duo’s highest first week entrance on the Billboard Hot 100 chart to date. The 4X Platinum certified “Something Just Like This” features Coldplay front man Chris Martins on vocals, and peaked in the top 5 on the Billboard Hot 100 chart. The track earned the group a 2018 Grammy nomination for “Best Pop Duo/Group Performance.”

The latest releases from the duo include “Save Yourself,” a collaboration with dance music tastemaker NGHTMRE, “Side Effects,” featuring longtime collaborator Emily Warren, “Sick Boy,” “You Owe Me,” “Everybody Hates Me” and “Somebody,” featuring Drew Love of buzzy R&B duo THEY. Together, the six tracks comprise the latest chapter in the duo’s ongoing building album entitled Sick Boy.

Early last year, the duo kicked off their Wynn Nightlife Residency in Las Vegas which has now been extended through 2019, and embarked on their highly successful 40-city “Memories…Do Not Open” arena tour which wrapped in June 2017. The group recently partnered with Tommy Hilfiger as their Brand Ambassadors, adding a new twist to the brand’s three decade-long legacy in menswear. Alex and Drew will continue releasing music and touring across the globe this year.