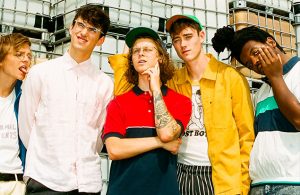 When Hippo Campus formed in 2013, their intentions were pure and simple. “We were in high school and the main idea was, ‘Let’s start a band and make our friends dance,’” Sutton recalls. “There was no real context to what we were doing—it was just total creative joy.”

But over the past five years, that context has shifted dramatically. The world around them warped into something bleak and unsteady, and reckoning with mental health issues became more and more crucial. On their sophomore album Bambi, the St. Paul, Minnesota-bred band navigate that upheaval with deliberate self-reflection. The result is a selection of songs that drift into much darker terrain, but unfold with a frenetic yet fragile beauty that makes even the most painful moments feel glorious.

Not only driven by exacting introspection, Bambi was also shaped by cultural shifts, including the #MeToo Movement. “That really made us take a look at how toxic masculinity has influenced the way we see ourselves and the world overall,” says Luppen. “In the past we might have been apprehensive about being super-vulnerable, but now we’re more aware of how important it is to come forward about dealing with depression or anxiety. Because if more men are able to do that, they might be less likely to express those feelings as anger or violence.”

Hippo Campus approached the making of Bambi with an eye toward the undoing of any distorted, social-media-fueled perceptions of the band. “Social media promotes this weird non-reality when it comes to artists and bands, where they get put up on a pedestal and treated like some kind of upgraded human,” says Stocker. “We’d much rather make community happen with our fans, which is the whole reason we started this in the first place.”

“We were getting sick of starting songs with riffs—we wanted to change it up and get out of our comfort zone,” says Stocker. “Plus there were a lot of late nights on this record, and when you’re in a dark room there’s nothing that sounds like a Juno-60. We just got dreamy with it.”

The band steered away from their formerly collaborative songwriting process, with Luppen, Stocker, Sutton and Allen each writing and demoing their material individually before bringing it to the table. “When you craft a song from the ground up all on your own, it allows you to make it more personal and to write whatever you feel without holding back,” says Luppen. “I think we were all finally able to get more honest about things like mental health, and in my songs I interrogated my relationship in a way I’d never had the confidence to do before.”

Throughout Bambi, Hippo Campus match their relentless self-examination with a joyfully adventurous sonic approach, ultimately transforming the emotional experience of the problems they’re exploring. On “Anxious,” urgent rhythms and untamed vocal delivery draw an unlikely power from raw vulnerability. “That song came from something I’d written a while ago, kind of a scribbling of all my social anxieties,” says Sutton. “For a long time I was living with these indefinable worries that I couldn’t comprehend, and I was never really sure if it was just a part of a growing up or something more than that.”

Meanwhile, on the album’s title track—a song about “feeling a lack of control over your mood swings, and trying to embolden the part of yourself that could help you get through that,” according to Sutton—Hippo Campus’s otherworldly vocals, delicate guitar lines, and sweetly determined lyrics have a strangely uplifting effect. And on “Mistakes,” the band’s choir-like harmonies and ethereal tones make for a haunting contrast to their meditation on the idea of “wanting to be the best you can for the people you love, but feeling like you can’t really carry that out,” as Luppen puts it.

Elsewhere on Bambi, Hippo Campus capture all the dizzying complexities of relationships with songs that endlessly morph in mood and texture. “Why Even Try” brings soaring melodies and glistening guitar tones to its frustrated musings on a possibly doomed friendship, while “Bubbles” offers a heartfelt apology to that same friend, brilliantly twisting the mood with its unhinged harmonies and frenzied guitars. And on “Golden,” an ode to Luppen’s girlfriend, Hippo Campus build an epic love song out of skittering beats, shimmering synth, and beautifully unruly guitar work.

One of the band’s greatest hopes for Bambi is that the album might help others in dealing with their own pain. “I’ve always considered the responsibility of art to be representing your specific experience,” says Sutton. “We’re saying, ‘This is what I’m doing now, this what I’m living like.’ It’s about sharing what you’re going through, so maybe someone else will feel less lonely.” And as Stocker points out, Bambi may find a particular connection with those feeling shaken up by the chaos of current times. “The only I’m sure about with this album is how unsure it is,” he says. “I want people to feel as confused as we are about everything, because confusion can be an interesting thing. When you don’t totally understand what’s going on, you never stop thinking and questioning and trying to figure things out for yourself. I think a lot of good can come from that.”