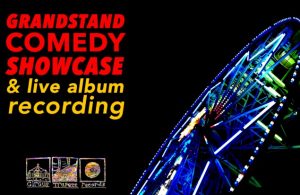 Circus Trapeze Records has recorded and released three Billboard-charting comedy albums at SteelStacks and they’re going for a fourth. Circus Trapeze founder Glen Tickle hosts a lineup of some of the best talent from the Lehigh Valley and beyond who are bringing their absolute best material.

Kirk Griffiths is a comic based in Philadelphia. He’s currently beefing with his barber, but is confident that it will work out in the end. He’s performed in LV ComedyPlatz festival 2017, 2018 and 2019, has advanced in Helium Comedy Club’s Philly’s Phunniest, and has opened for names such as Kyle Kinane, Jordan Carlos, and Michelle Buteau. He is also host of the Proper Ebonics podcast. Roya Hamadani has performed at the Steelstacks, Musikfest, Philly Punchline, and venues all over Pennsylvania. She co-hosts the bimonthly open mic Stout Laughs in Bethlehem and will be performing at the Scranton Fringefest in October.

Glen Tickle was once stopped in a hallway by a woman who said, “I know you. You that dad comic,” and that sums him up pretty well. He has been on SiriusXM, Amazon Prime, CoziTV, the internet (heard of it?), and his debut album (Yes, Really) charted on Billboard. His first comedy special is being filmed later this year. Ian Webster has performed at the SteelStacks and throughout Pennsylvania for 6 years. He co-hosts the comedy open-mic Stout Laughs at the Bethlehem Brewworks.