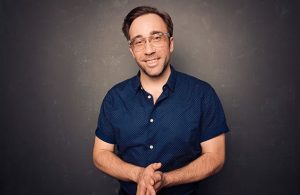 Jim Tews is an Allentown-raised comedian, writer, animator, and director who’s been seen on NBC and FX, seen in the New York Times, heard on satellite radio, written a Times bestseller, and even animated a music video for Weezer.

He performs regularly all over New York City, tours nationally, and sometimes even internationally. He’s a veteran of the U.S. Coast Guard (America’s most sensitive service) and went to film school for some reason. He plays three instruments poorly, but cannot juggle. He lives in Ridgewood, Queens with his partner, two cats, and a dog with an underbite. The recipient of the Abington Heights High School Class Clown Award ‘02 and Bachelor’s of Arts Degree in Dance and Choreography from a women’s college (can ya believe it), Ellen Doyle’s comedy ride is one not to miss.

Her humor is autobiographical and told with the lovable bitterness of an east coaster. With topics ranging from her family to being jealous about the wrong things as a child she tells jokes with a take no prisoners approach. Sarcastic, dark, unapologetic, yet insanely charming, Ellen says what she thinks although most of those thoughts should probably be kept to herself.

She has toured all over the country and has been featured at clubs, festivals, bars, coffee shops, living rooms, and public bathrooms across America’s heartland. Ellen has a dog named Ghost. Ghost was featured on Animal Planet’s “Rescue Dog to Super Dog”.