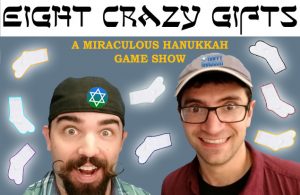 A game show based on everyone’s favorite 8-day holiday, Hanukkah/Chanukkah/HanUKAH/chhhhaaaaanuukuah! The audience has the chance to compete for 8 prizes given away through 8 miraculous games! Your Bubbe will be disappointed in you if you miss this show. All chosen people and goys are welcome! Aaron is a comedian, accountant, and older brother. He has studied Improv at ArtsQuest and at UCB in New York. He is currently on improv teams Staycation, Four Eyes, and Cranks & Pulleys. Other comedy credits include: character showcases, the ‘Improv Comedy Power Hour’, and some semi-funny sketch comedy. Oh yeah, Aaron hosted a comedy game show called “Guilty Pleasures: The Game Show”. Good times.

Ben Youngerman is a comedian, actor, mascot, and emcee. He performs with Lehigh Valley Improv team, The Fourtets and directs the comedy sketch show, “Hockey Fight” at SteelStacks. You can also catch him as Bowtie Ben at the Lehigh Valley Phantoms.